YOU CAN ACCOMPLISH THE IMPOSSIBLE * 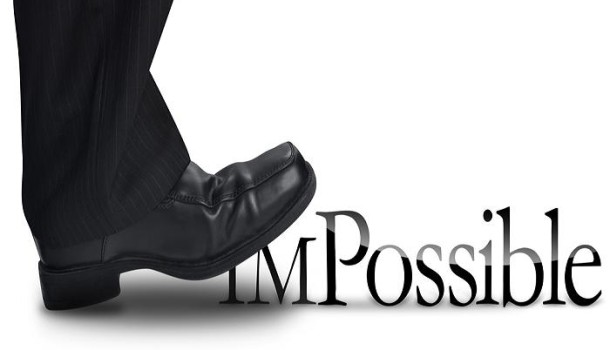 Once it was known that what everyone “knew” about the barrier was wrong, the barrier almost magically disappeared

Drucker was a genius who thought and did things differently than anyone else. He felt that managers should make their decisions “from the gut,” not ignoring economic analysis or the importance of numbers, but neither depending on them solely, or even considering them primary in any decision.

The most frequently heard admonition from Drucker in the classroom was the comment that what everyone knew (he meant what everyone believed) was usually wrong. From “the earth is flat” to “man cannot fly” to “it is impossible for the human body to attain the speed necessary to run a mile in four minutes.” What everyone knew, including countless doctors and kinesiology scientists was eventually proved wrong. The four minute barrier to human speed was disproved in 1954 by English neurologist Roger Bannister. He ran the mile in 3:59.4 minutes. The "four-minute barrier" has since been broken by over 1,400 athletes, many in high school. Once it was known that what everyone “knew” about the barrier was wrong, the barrier almost magically disappeared. It required only one individual to show it could be done.

My Effort at Breaking Barriers

As a Reserve Air Force officer. I was selected to attend a 10 month educational program given by the Industrial College of the Armed Forces in Washington along with selected mid-career, active duty officers from all four U.S. military branches. Three Air Force Reservists were invited to attend, and I was one of the three.

Twice during the year there was a physical competition. Volunteer students undertook every fitness test required by all four branches of the armed forces. A student completing the minimum requirements of exercises required by all four branches successfully would receive a t-shirt proclaiming this accomplishment. If a student failed in the Fall, he or she got a second chance in the Spring. There would also be awards for the top three scores overall. Although oldest among the 240 officers at nearly 50,  I worked out regularly. I thought I might win my t-shirt,  but it would be a close thing. The more I thought about it the more I wanted that t-shirt. However, being the old man in the class, few thought I could meet all the requirements of Army, Navy, Air Force, and the Marine Corps  and I had some doubts  myself.

The first event was two minute sit-ups.  The second was two minute pushups. Both required that you performed as many repetitions as you could during a two minute period. Next came the maximum number of pullups that you could do with no time limit. The final requirement was a 3 ½ mile run for the best time you could manage. If you completed all four events and met the minimum requirements set by each service for their events, you got your t-shirt.

There were only about two months to prepare in the Fall, but I was determined to do my best at my first attempt and not have to go through it again in the Spring if I failed, so I trained hard. Surprising everyone, including myself,  I not only got my t-shirt but finished in third place among all those who competed. Right behind me in fourth place was a good friend. He was in my section and was a champion runner. He told me that, friends or not, he intended to move up to third place and be one of the top three who would be get awards.

My Training for the Spring Physical Fitness Tests

I knew that finishing for the year in third place wouldn’t be easy. My friend was in terrific shape, and ten years younger. He would beat my time running. Moreover, another good friend from the army was also a champion runner and he was in second place. A Marine was in first place overall. I had never thought it possible previously to finish in one of the top three slots. However, it was the total score from all four exercises that counted, not just running. I trained with both weights and running, but no one, including me, considered that I could do much better than I had already.  But when I thought about it. I remembered Drucker’s comment that what everyone knew should be disregarded. Also, I had learned the importance of the mind in both physical and mental accomplishments. I thought that I might be able do it if I worked hard enough.

I did a lot of research. I found  that while the physical was important, the mental was more so. I discovered that there was a power in belief. For the mental training I saw myself winning, However if I was going to win, why number three? Instead, I saw myself winning first place. Of course, I had to build my strength so that I could do a lot better than I had in the Fall. I decided that my age was unimportant.

The wild card in my plans was my back. I had sustained a back injury some years earlier. If my back went out of whack, as it usually did once or twice every year, I suffered intense pain, sometimes for several weeks. Not only would I not be able to run, but I would barely be able to walk or do any exercise. Even if my back got better before the competition, I would lose several weeks of training and slip back in my strength and conditioning. Of course, if this happened at the time of the competition it would eliminate me entirely.

I consulted with several fitness experts and doctors. All advised that I was in good enough shape not to hurt myself.  But as to winning? All tactfully declined to predict my chances and pointed out that I already had got my t-shirt.

I increased the number of workouts to five one-hour workouts each week  and hoped my back would behave. I was as careful as I could be. I spent three days on the pushups, sit-ups, and pullups and two days running and building up my distance and speed running. I ran through the snow and ice of a Washington, DC winter and ran with my wife, Nurit, two times on these ice and snow jaunts when she visited me from California. I grew stronger and stronger, and all was going well until early March when two weeks before the class was to depart on a major visit to NATO in Europe disaster struck. My back ailment struck, and I had to stop all work-outs. I could barely attend class.

What to do?  Should I give it all up? I had already passed the tests once. I had my t-shirt. I didn’t need to put myself through any more torture. I could honorably call it a day. However, I reviewed the mental exercise research. I discovered that a number who used this mental technique recommended not just telling yourself you were going to win, but actually performing the complete exercise performing all events mentally. Others wished me well, but probably wrote me off. I had no alternative.

Instead of my normal workouts, every day I sat in a corner of my bedroom after class and mentally did every exercise and performed every repetition in my mind. I couldn’t run, but I could mentally go through the entire 3 ½ mile run and the other exercises in my mind. I did these mental exercises not just 5 days a week, but seven days  a week as if I were doing them in reality rather than in my imagination. I spent the same time sitting on the floor with my eyes shut imagining my workouts as I had in the gym or running on the banks of the nearby Potomac. After about a month, my back pains abated, and I returned to my former actual physical training.

Surprisingly, while I hadn’t increased my strength or endurance during the break in my training, I hadn’t lost anything either. When the day of the competition came, I was at my peak and went all out. My competitors had gotten stronger and increased their scores, but so had I. I was able to do 40 pull-ups, 104 two minute pushups, 94 two minute sit-ups and completed the 3 ½ mile run in 24 minutes and 40 seconds. I was only first in pull-ups, but I was high enough in everything else. I won the trophy for the highest overall score for the year. There was no question, but that this was due to, this mental technique and what Drucker had taught me about groupthink being wrong. It  enabled me to succeed just as the four minute mile was successfully run by Dr. Bannister despite numerous scientists and doctors on radio and television saying that the human body could not run a mile in four minutes.

Years later, I suffered a stroke which paralyzed me such that I couldn’t walk or talk. I was able to both regain my speech and my ability to walk, using the same technique and a lot of hard work. The lesson here is that you probably can do a lot more than you think, even if everyone else is certain you can’t.