Peaches and Coconuts, not just fruits 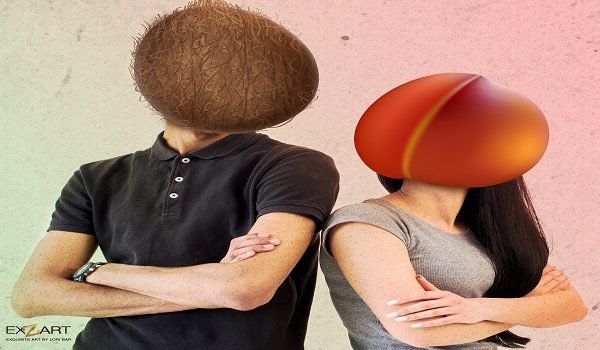 I was having dinner with two German business colleagues. At one point they were both discussing their children, so naturally I turned to one of them and asked: “So how long have you been married? In hindsight, and before becoming a cultural expert, little did I know that my question was inappropriate and too personal in German culture.

It was a classic mistake. One of the first things you notice when working in a new culture is that the rules about what information is and is not appropriate to ask and share with strangers is different. Understanding those rules, however, is a prerequisite for succeeding in a new culture.

One way to find out if you are acting properly is understanding the difference between “peach” and “coconut” cultures.

U.S.A. and Japan are good examples of “peach” cultures. Americans and Japanese are “soft” on the outside. They are very friendly to people they just met. They smile at strangers, chat, share information, and are very nice and helpful. However, once you get past the initial friendliness, you see their real private self is protected by a hard shell of the pit.

Russia, France and Germany are good examples of “coconut” cultures. They are “hard” on the outside. They rarely smile at strangers, do not easily engage in conversation, and may look unfriendly or even aggressive first. However, if you manage to break through their hard-outer shell, they tend to become close loyal friends who will accept you as family. In other words, relationships are built up slowly, but they also tend to last longer.

These differences often lead to misunderstandings and conflict:

Russians, French and Germans may think Americans and Japanese are shallow, have a fake smile, are manipulative and egoistic.

“Coconuts” may react to “peaches” in a couple of ways. Some interpret the friendliness as an offer of friendship and when people don’t follow through on the unintended offer, they conclude that the peaches are disingenuous or hypocritical.  An Israeli student studying in the U.S. understood this the hard way. Every time he would meet an American student, the meeting would end with “Let’s get together soon” and “got to invite you to the house for coffee”. The Israeli was very pleased with making so many new friends, but time and again none of those friendships developed beyond the superficial invitations, or they would forget to tell him where they live.

Others get annoyed with the over friendliness. A French woman leaving Walmart was disturbed by Walmart’s greeter’s peachiness””: “Did you find everything you came in for?” “He doesn’t even know me, why does he care about my purchases?” She felt uncomfortable sharing information with a stranger she never met before as in German culture one does not easily converse with strangers.

After understanding these differences, we need to remember that when comparing cultures, everything is relative. The British are “coconuts” in California but “peaches” in Paris. And there are also subtle gradations, as caricatured in the old joke about the Swede and the Finn who meet for drinks, spending hours drinking beer in silence. Eventually, raising his glass, the Swede says, "Skol!" The Finn is appalled: "Did we come here to talk, or to drink?"

Having said that, it's odd that in the 21st century, being a part of a hyperconnected world, cross-cultural misunderstandings still retain their power to offend. Can an American still genuinely offend a Russian by asking information that is perceived as too personal, or a Brit a South Korean by handling his business card too casually?

Next time you interface business colleagues from another culture find out in advance if the people are “peach” or “coconut” and learn to adjust to different cultural norms by either sharing personal information or understanding that it takes just a bit longer for your “coconut” associate to trust you and open up to you.

What about you – Are you a Peach or a Coconut?