What to do about Risk* 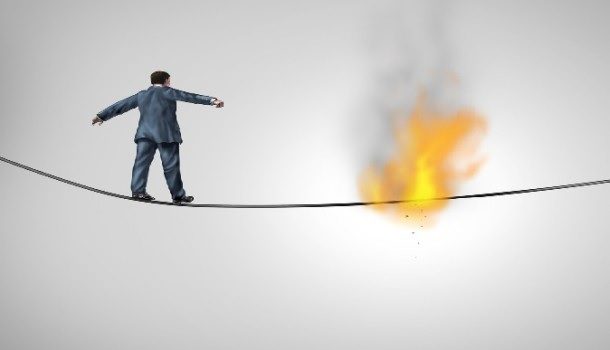 To attain success, risk is unavoidable. Not recognizing this can lead to unexpected problems

Peter Drucker, “The Man Who Created Modern Management”  found that though risk cannot be completely eliminated, it can be minimized or factors in risk may be manipulated so as to control risk better.  However,  risk cannot be avoided, and risk might even be essential for many successful events.  British SAS special forces adopted the motto “Who Dares Wins” promoting the fact that high risk isn’t necessarily a negative. I have adopted a similar one: “Dare the Impossible ; Achieve the Extraordinary.”

Even Seeking Lower Risk Could Be Wrong

Drucker saw that in attempting to lower risk, managers, and professionals of all types and in all professions sometimes make assumptions which lead to disaster. The most used means of risk lowering is to assume either no change and that the current situation is static or if a trend, that the trend will continue. The fallacy of either assumption can be seen almost every day as many stock market investors make one of these two assumptions with eventually poor results. But it is true in all human endeavors because there will always be unexpected events which occur in the future. They may be a competitor’s action, or COVID-19. Drucker knew that change is inevitable and so advised his consulting recipients that they must prepare and expect it.

Drucker learned to analyze the situation and to emphasize taking the right risks. Taking the wrong risk could be just as bad as refusing to take any risk. However, Drucker’s investigations led to the discovery of a critical factor in the process: while deciding on the right risk, one had to institute controls in the actions involved in taking the risk.  Otherwise, even though it might well be the right risk to take, to manage it properly, it must be completely understood.

1. Risk controls won’t be objective, and they won’t be neutral.

2. While they need to focus on the real results, the “real” results aren’t always possible to control.

3.Controls are needed for both those  measurable and events which cannot be measured exactly.

The Near Impossibility of Objectivity and Neutrality

From 1924–1932 a study of lighting conditions was done at the Hawthorne Works, a Western Electric factory outside of Chicago. One experiment was to examine the effect on productivity of better lighting. It sounds simple enough. The control was based on increasing wattage of the light bulbs weekly and then noting the results in productivity.  It was expected that productivity would increase as lighting got better every week, and sure enough, it did.

However, one week through error, the wrong bulbs were used, and wattage was decreased instead of increased with the result  that the lighting intensity declined. Guess what? Productivity improved anyway. It was not a miracle nor an error in measurement. What had happened was that workers expected the lighting intensity to increase and this motivated them to work harder, more efficiently, and hence more productively. Today this is known today as the "Hawthorne Effect" commemorating the Hawthorne Works, the Western Electric Company outside of Chicago at which the phenomenon was observed, It demonstrates that the novelty alone of having research conducted along with the increased attention to the measurement results can cause at least a temporary increase in productivity. And it means that as Drucker said, “Controls are not applied to a falling stone, but to a social situation with living, breathing, human beings who can and will be influenced by the controls themselves.”

Focusing on the Real Results

It is relatively easy to measure effort or efficiency, but much more difficult to measure real results with a control. Drucker explained that it was of no value to have the most efficient engineering department if the department was efficiently designing the wrong products. Drucker also differentiated leadership from management. Others have since similarly adopted his formula:  that management was doing things right – read efficiently – while leadership was doing the right things, that is, the effective things to get the job done, for the end result. This means one might be very efficient as a manager and still fail as a  leader.

Measuring efficiency is usually not so difficult. For example, one can measure the number of times a leader recognizes subordinates for accomplishing good work. That’s considered a sign of good leadership. However, “good work” can be done on the wrong acts, as well as the right ones. Maybe salespeople are doing a marvelous job selling the wrong product or not spending the time necessary to develop long term relationships that are sustainable when an unexpected event occurs that  effect general sales. Is this “good work?” To complicate controls further, how do we know which are “the right things.” This is much harder to know when so many factors and multiple humans are involved. Since leadership is an art, in observation, its quality may be only in the eyes of the beholder.

Controls are also difficult because some events in an organization, important to risk, simply aren’t measurable, results or no. We already noted that you don’t necessarily have the true facts about the future. You don’t know what may suddenly happen on the way to the future, either. You may predict that eventually an earthquake or a pandemic is inevitable, but precise knowledge regarding the date, is not. The ubiquitous slide rule, once on the person of every engineer worthy of the name, disappeared almost overnight when the pocket electronic calculator unexpectedly was invented and hit the market.  Railroads were not ready for the development of the aircraft industry which captured most of the long-distance, personal transportation market even though this did not happen instantaneously.

1. Drucker determined that all controls must satisfy certain specific specifications:

2. They had to be economical – the less effort they required, the better.

3. They had to be meaningful – that is. intrinsically significant

4. They must be appropriate to the nature of what you are measuring – absenteeism of a yearly average of 10 days per employee sounds acceptable, but what if you have only two employees and one was never absent and all absences creating that average due to the other?

Measurements must be congruent to the phenomenon measured. Consider book sales. A famous entrepreneur had written a best seller. He had bought a well-known company and promoted the company’s product frequently on television stating that “he liked the product so much, that he had bought the company.” His advertising promotions were innovative and attracted customers. However, when I read his book, I found that at best it offered few useful insights to his success. Yet it became a bestseller and sold 2,000,000 copies, surpassing many better books on entrepreneurship in sales, including Drucker’s "Innovation and Entrepreneurship" which was published at about the same time.

It was revealed that the author had spent almost $2,000,000 of his own money in TV ads. Book royalties for non-fiction books to the author are usually about 15% of the net amount received by the publisher from the bookseller. The net to the publisher are roughly 40-50% of the retail price of the book.  I estimated that he had earned about $ 200,000 in royalties for his book sales. Therefore, he lost $1,800,000 dollars in writing and promoting his book. He may have been willing to take this loss for bragging rights and one could argue that the book helped to sell the company’s product, an electric razor. But as a control measurement, book sales alone, the most frequent tool used to measure public demand for a book by readers is probably a poor tool without other factors being noted and compared.

Control requirements  5, 6, and 7 are much easier and intuitive. They need to be timely. Results are an expensive waste of time if the information received arrives too late to be of use. They need to be simple. As Drucker noted, complicated frequently cause confusion and lead to other errors. Finally, they need to be oriented toward action. Controls are not for academic interest. They are for implementing strategy once actions with the right risks are chosen.

The final limitation on controls is the organization itself. An organization operates with rules, policies, rewards, punishments, incentives and resources, capital equipment, etc. but its success comes from people and their daily, frequently unquantifiable, actions. The expressions of their actions, such as an increase in salary, may be quantifiable. However, feelings, motivations, drive, ambitions, leadership, etc. may  not be easily quantifiable.  As an operational system the organization cannot be accurately quantified except by results or progress toward defined goals

What It All Means

Risk is essential, and this is what Drucker taught his students. It is essential to pick the right risks and then to control these risks considering the many factors which may make them difficult to comprehend and use. But knowledge is power, or at least stored power. Selecting the right risks and monitoring the seven important aspects of the risk controls identified by Drucker means effective risk management. One cannot do more, nor should the manager consider doing less.

*Adapted and syndicated from Consulting Drucker and Peter Drucker on Consulting: How to Apply Drucker’s Principles for Business Success/published (LID 2016, 2018.)