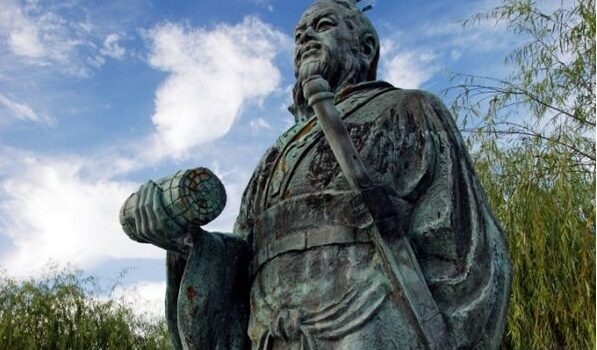 Drucker recommended four essentials in managing including competitions. One essential works especially well when faced with a stronger competitor. However, though its use is ancient, it is infrequently emphasized today

It started in China, 2000 years ago, Sun Tzu was a successful general, military strategist, writer, and philosopher. His  book The Art of War remains a classic and is studied in war colleges around the globe. It contains an important recommendation which duplicates one of Drucker’s four essentials and underscores its importance. Moreover, this essential is broader than warfare.

In this single sentence Sun Tzu summarized the importance of self-knowledge involving most endeavors. Self-knowledge is especially important in situations in which you must compete against strong competition. This includes athletic competitions,  contests of all types, and of course in business. Regardless of your occupation or the size of your organization, this recommendation will affect your success. While many emphasize knowledge of the competition, and this is certainly important, little is said about the importance of self-knowledge. Yet self-knowledge, as emphasized by Sun Tzu and Drucker, is of even greater importance.

The Most Decisive Battle in History

Let’s look at warfare first. The most decisive battle in history was the Battle of Cannae in which an entire Roman army was destroyed by a much smaller force. The Battle of Cannae was a key engagement of the Second Punic War between the Roman Republic and Carthage, fought on 2 August 216 BC near the village of Cannae in Apulia, southeast Italy. The Roman attacking force of 86,000 under consuls Paullus and Varro was pitted against a far smaller Carthaginian force of 50,000 assembled with allies from different African tribes. It was commanded by the Carthaginian general, Hannibal.

The Romans had chosen the battlefield and made the decision to attack. It was on their home ground and in their familiar territory. But that and numerical superiority were only two of the advantages the Romans had. The Carthaginian Army had made a long, tiring, and dangerous journey which included crossing the Alps less than two years earlier. Their army suffered  from this event,  Moreover it was comprised of many foreign tribes recruited as it crossed Africa. These allies spoke different languages, had different customs, religions, weaponry, and reasons for fighting. This complicated not only Hannibal’s strategy but even his basic communications and authority on the battlefield. However, Hannibal was a master of both leadership and strategy. He knew his diverse forces and organized them to maximize each ally’s advantages and minimize their disadvantages according to their weaponry, customs, and unique expertise. He took advantage of their diversity, usually thought to be a disadvantage and was one of the first to demonstrate the advantages that might be gained.

Hannibal divided and placed his strongest allies on the flanks of his army. His alignment included a relatively weak center but with strong forces on either flank. The troops at his center were instructed neither to charge nor retreat, but to retreat orderly as the Romans advanced while they remained in physical contact. The strong allied forces on either flank were ordered not to maneuver, but to hold their positions and to neither advance nor retreat until he signaled their action.

The Roman cavalry was positioned at the rear of their advancing infantry. By maneuver, Hannibal moved his own cavalry around the battlefield to engage them. They defeated each of two Roman calvary cohorts in succession by concentrating first against one, and then moving on and attacking the other. This happened while the main body of Roman infantry continued to advance. The Roman commanders  ignored the cavalry action as they focused their attention against the weak Carthaginian center which, while fighting, was clearly retreating even while the Carthaginian allies placed on the flanks held to their original positions. The Roman commanders smelled victory and continued to press forward, more and more rapidly and completely oblivious to the danger from the immobile Carthaginian allies on their flanks.

After defeating the Roman cavalry, Hannibal’s victorious cavalry attacked the unprotected rear of the advancing Romans. On signal, the two strong flanks swung inward like giant gates, closing on the Romans, and with the cavalry at the rear, until they were completely encircled. The Carthaginian center stopped its rearward movement and instead pressed forward. The Romans were now totally encircled and crushed together by the cavalry at the rear and the strong forces on their flanks while the now advancing weaker center applied pressure at their front. They could not escape and were unable even to use their weapons effectively. The slaughter was over quickly.  95% of the Roman Army, was left dead or dying on the field of battle! Yet the fight had begun with the Romans being far superior in numbers and having all the advantages. Hannibal won at Cannae because of his superior leadership and strategy. Both were enabled because of the self-knowledge of his own diverse forces which he employed with devasting effect.

In modern times, thousands of runners converged on Australia annually to run a 543.7-mile endurance race from Sydney to Melbourne. Because of a voluntary six hour rest stop at night it took five days to cross the finish line, and not everyone made it.

It was one of the toughest, if not the toughest, of the ultra-marathons. Only the best athletes, usually under age 30, and in top physical shape even attempted it.  Most winners had the financial backing of top sports sponsors, manufacturers of major brands of sporting goods. However, In 1983, a 61 year-old senior by the name of Cliff Young showed up and registered to compete. He was without sponsorship. Many, including newsmen thought it was a joke or a publicity stunt.  Young had been raised on a 2000 acre sheep farm. According to him, while moving the herd to market yearly, the sheep frequently scattered. To keep control, he had to run on foot.  It required several days without sleep or rest. He claimed he would have no trouble competing in the race even though this was his first time. Others had their doubts. He was not particularly impressive physically and he was twice the age of most competitors. However, he did have self-knowledge of the advantage which his running with the sheep had given him. He had developed a slow shuffling gait which he maintained at a moderate speed, but unlike his competition, without rest or sleep.

Athletes in this ultra-marathon ran for about 18 hours and then rested at night. This took five days, but there were no rules about stopping. The objective was simply to get from Sydney to Melbourne. Most thought Young wouldn’t be able to do complete the run without sleep every night. Young not only ran the distance using his shuffling gait without sleep, but much to everyone’s amazement, he won, setting a new record for the time and was presented with a $10,000 prize that he hadn’t expected. He succeeded because of his self-knowledge from his sheep herding experience. He knew that he could go without sleep. His running shuffle wasn’t fast, but he had the self-knowledge from his experience with sheep farming that his strange gait could be maintained without sleep, even for 540 miles – and it didn’t take five days.

How Einstein Became World Famous when not Promoted

Albert Einstein was unknown and working for the Swiss Patent Office In Bern at an entry level  job. In 1905, a year in which he had been passed over for promotion, he decided to use his spare time to develop theories he had only been thinking about. He had no computer, no white-coated assistants, not even a chalk board and no special financial support.  Nevertheless, in one year he wrote and published four major scientific papers done partly while at work and became world famous. He was eventually awarded the Nobel Prize for physics. His work in this one year included both the Theory of Relativity and E= MC², the equation for conservation of energy. It probably is the most famous equation in the world.  How did he do it? What Einstein did have was the ability to visualize the complicated results from the conclusions of others and to combine them into images and equations which could be readily understood. He, too. used his self-knowledge to more than make up for his competitors’ advantages. Through using his self-knowledge, he became known as the greatest theoretical physicist in the world.

Have you explored and used Drucker’s self-knowledge essential? You probably won’t find it in any textbook, but It is even more powerful than competitive analysis!

*Syndicated internationally. The author can be contacted directly at wcohen@stuffofheroes.com

Peter Drucker on Consulting: How to Apply Drucker’s Principles for Business Success (LID, 2016)

photo: Statue of Sun Tzu in Yurihama, Tottori, in Japan *