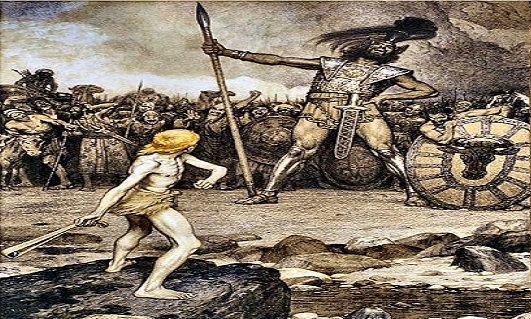 occupying a niche can make a marketer immune from competition altogether

Drucker recognized that small organizations can have advantages over larger competitors and that these advantages can be very important in a particular situation. From this simple realization he developed four strategies by which smaller companies could defeat larger, more powerful competitors.

Dominating a new market or industry

Developing a market which is currently unserved

Finding and occupying a specialized niche

Changing the financial calculations of the seller-buyer transaction

Dominating a New Market or Industry

The basic idea here is simple. You enter and dominate a new market or industry before anybody else does. Probably the best example of how this can be done is Steven Jobs at Apple Computers. Many companies and individuals knew how to make personal computers. Giant companies like IBM made huge computers priced at millions for government and large corporations. Smaller companies were marketing computers primarily for games. Jobs couldn’t even build a single computer board by himself, but his friend Steve Wozniak could. Jobs saw the potential and had the confidence and ability to commit and convince others. He not only dominated a new industry for personal computers, but he also created it.

Developing A Market Which Is Currently Unserved

First you need ask yourself why the market is unserved. Usually, it is because a product with potential, which has already been introduced has a shortcoming which can be corrected. Drucker thought that this was a minimal risk strategy.

Finding and Occupying a Specialized Niche

Sony licensed the transistor and its radio application from Bell Labs and took over the market by reducing the price significantly. Even the term ‘transistor’ was coined by an American. Although invented by Bell Labs, was overpriced. Sony found what it took to serve the market.

Drucker differentiated this approach by contrasting it as emphasizing positional occupation and control versus the previous strategies emphasizing grappling with a competition. According to Drucker, occupying a niche can make a marketer immune from competition altogether because the whole point is to be inconspicuous or to be in a market of what appears to be limited potential, despite the product’s being essential, so that no one else is likely to compete until it’s too late. The marketer places his offering or company in the optimum niche. Basically, it means being, where the competition doesn’t go until it’s too late.

Changing the Financial Characteristics of the Situation

Drucker’s final marketing approach for a David beating a Goliath goes beyond just dropping the price. All you need to do is to ask yourself what would truly make things easier, or better for your customers from their point of view.

Price has long been a tactic used by clever marketers. However, Drucker went further in this marketing strategy. He said that pricing should be done in accordance with the needs of the customer and what the customer buys, not what the supplier sells.

Gillette became a major name in razors when King Gillette practically gave the safety razor itself away when he realized he could make more money selling the blades over the lifetime of the user if he did so.

The photographic industry provides all sorts of good examples for this approach. Who would have thought that cameras would essentially be given to the customer along with the film? After all, neither is what customers really want. What they really want are the photos. And so, customers today can buy a throwaway camera, film, and developed photos at an economical price.

Other companies had the idea to mail you free film. You shot the film and mailed the exposed rolls to the developer in protective envelopes along with a cheque covering the number and types of photos you wanted. When your order was fulfilled, you’d find two more rolls of free film. Of course, you needn’t buy photo glossies nowadays. You could also order your pictures on CDs.

With the advent of digital cameras and such along with cameras built into our mobile phones, the need now is primarily that of photo storage. Not to worry. Companies will store your digital photos and, in many cases, won’t charge you anything. They even facilitate in building your photo albums and emailing these albums out to friends and family. Of course, pricing is calculated so that glossies, CDs, or printing your photos on cards, coffee mugs, or other items can all be accomplished, and that’s where these companies’ profit.

The U.S. Post Office’s pricing by ability to fit your shipment in a particular size of box is also an example of changing the pricing. Notice how the pricing has changed from what the seller provides, camera, film, developing, etc. to what the buyer really wants. That’s the key to this strategy.

Adapting to the Customer’s Social and Economic Reality

Many marketers speak of the ‘irrational customer’. Drucker said that there was no such thing. He stated that the marketer must assume that the customer is always rational, even though this reality may be a far different rationality from the marketers. Mary Kay Ash, the famed CEO of Mary Kay Ash Cosmetics who build a billion-dollar company out of a $5,000 investment once told the story about saving the money to buy her first new car on her birthday. She did the financial analysis before going to a showroom, looked at the various models from the various manufacturers in catalogues, checked all the sticker prices, and selected the exact car she wanted. She even had the money in cash in her purse ready to pay for the exact car she had selected with certain options from a catalogue and previous incognito visits to a showroom!

However, in those days most women didn’t buy cars, and when she went to make the purchase, she was ignored by the only salesman present selling the car she wanted. Finally, she got his attention, but he was so condescending in his attitude that she asked to speak to the manager. She was told the manager was out to lunch for an hour. Having an hour to spare, she went to the showroom of a competitor nearby. Here the salesman treated her so well, though she was a woman, that she ignored her previous decision and bought the car he showed her without further analysis. She didn’t return to talk with the manager at the first dealership. Irrational? Maybe, but not in her reality. Similarly, when considering tactical pricing, consider this. If you don’t know the best from a selection of products and you want to make an immediate purchase, how do you know which is of the highest quality? Many potential customers go for the most expensive. Irrational? Not in their reality. Remember, it is the customer’s reality that counts.

Delivering what Represents True Value to the Customer

True value, like quality, is up to the customer, not the marketer. This is critical because customers, or organizational buyers, don’t purchase a product or service. They purchase satisfaction of a want or need. This means they purchase value and that may be perceived from a variety of sources.

Some companies spend millions providing additions that they think represent more value and are appreciated by the customer. Unfortunately, the customer may not think that these additions represent value. To a teenage girl, value might be defined primarily by fashion and perceived appearance by peers. That is, the fashion of what the teenager wears in her geographical area at that time. Even comfort or quality might come in a poor second. To the same teenage girl’s mother, value may be represented by durability. To her father, it might be price. That’s why it’s so important to do the research to find out who is using the product or service, who might influence the purchase decision, and who is putting out the money. It’s about what the customer, and whoever might influence that customer (directly or indirectly), consider to be of value, not the supplier or marketer that is important. Some marketers consider this irrational, too. Value, however, is part of the customer’s reality.

All this combined fit together to support that with Drucker’s four strategies so you can defeat a much larger and stronger competitor just as David defeated Goliath. And you won’t need a sling!

*This article is syndicated internationally.