Drucker in the Classroom* 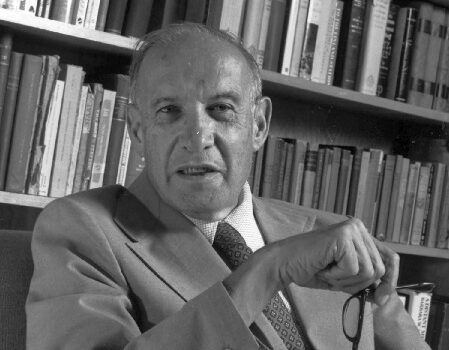 Fifty years ago, it was the custom at Claremont Graduate University for graduate students and professors to be on a first name basis. It is the same today. So, when I refer to Peter Drucker, “the man who invented management” as “Peter,” I am not being disrespectful; Peter was the title that he preferred.

In class Peter at times appeared to be occasionally boastful, but he was always accurate, approachable, friendly, and open to questions from students who he inevitably answered without hesitation. He knew wives, including mine, by their first names, and could identify them after once making their acquaintance. He truly cared for his students and their learning entrusted to him. As a result, his lectures occasionally could and did go on several hours over schedule to 11 or 12 o’clock at night if he felt that his students gained  knowledge that he thought important for them to have.

In the first class that I took from him, I got the wrong impression when he began the class by an offer to sign our textbook which was always his book Management: Tasks, Responsibilities, Practices, the weighty 839 page tome which had been published one or two years earlier. Those Drucker students accepting his offer, in this class about twenty or thirty students, lined up to get the signature which had been offered. The was about half the class. I think I was the only new Drucker student who remained in my seat. Many of my classmates had him in previous classes and already had the autograph in their books. However, his announcement struck me as egotistical, and I was determined to demonstrate that I was unmoved by his fame or position, so I remained seated. However, this was not a demonstration of his ego. He simply wanted to get this out of the way since there was a real demand for his autograph.

He told us that we would only be responsible for ten chapters during the course and that he thought the notion anyone could master an entire book of 61 chapters in one semester was unrealistic. He used the same textbook but different chapters, in all the classes that he taught.

Some months later, I think it was the third or fourth class that I took from him. I got in line with the others to get his autograph. When it was my turn he asked me if there was anything special that I wanted him to write. Without even stopping to think I blurted out “Just write ‘To Bill Cohen to whom I owe everything.’” Talk about nerve! However, by then as all his students, I considered myself his friend.

Only a real jerk would respond with a joke like mine to an individual who was one of the most famous and respected men in the world. However, being both immature and what was known as a smart aleck, I was a real jerk and that’s what I did. Peter said not a word but picked up his pen and began to write. As I returned to my seat I thought, “My gosh did he actually write what I asked?”

I still re-read the book and it is before me now almost fifty years later. He had written only: “To Bill Cohen with Best Regards, Peter F. Drucker.” I felt that I was lucky in not getting a severe reprimand for my insolence.

Years later when the university where I was teaching had nominated me for a major award he wrote on my behalf:

“Bill Cohen is a true inspiration for all of us in academe, and above all, for students who need a true role model, a true exemplar of the very best they could and should aspire to.” Peter did not hold grudges.

Typical in a doctoral program in the U.S., students are required to take a series of tests known as the comprehensives which they must pass after all course work is completed. We were sent a list of the professors grading each section along with their contact information so we could call them and get their opinions of how to prepare. All were our former instructors. I called my finance professor, and he gave me a list of five books that I should review. Other professors had similar recommendations for their areas. Except for Peter. When I called, he told me that there was no need to review anything in his area. “I have prepared you sufficiently already and there is no need for you to review anything,” he said. That was Peter — there was the Drucker Difference.

Several years after his death, his wife Doris told me that I was his favorite student. I had no indication of this when he was my professor. This probably was not because I demonstrated so much brilliance, but rather that he enjoyed my being unafraid of him. Also, Drucker respected the military and later regarding a book on Army leadership authored by Frances Hesselbein and General Eric Shinseki he had written: “The Army trains and develops more leaders than all other institutions altogether―and with a lower casualty rate.”

Drucker, Demonstrated his Own Brand of Brashness

Asked by a student in class how he managed to make accurate predictions of the future, Drucker responded that he listened … and then after several seconds added: “to myself.” Then he laughed to let us know he was joking.

His method of forecasting the future was simple. First, he said, it was easier to create the future than to predict it. Then said that he looked through the window and took note of what already had happened and was likely to occur as a result. In his personal life he had obtained a PhD from Goethe University in Frankfurt, Germany. His intent was to go to Cologne where he had an uncle at the University of Cologne. But in 1933, Hitler came to power in Germany. Drucker left almost at once and immigrated to England. He re-immigrated to the U.S. four years later in 1937. In 1936 he had published “The Jewish Question in Germany” in German. It was recently translated and published on the Internet in English. In the second paragraph he identifies himself as a German citizen of Jewish origin

1. What is your mission?

2. Who is your customer?

3. What does your customer value?

4. What results are you trying to accomplish? How do you measure success with these results?

5. What is your plan for reaching the results that you seek?

While other professors stressed the use of sophisticated methods of mathematical analysis, and even the selection of complex formulae to develop them, Drucker told us that after analyzing all the data, in the end managers usually made their decisions from the gut, and this was as it should be.

He denied “management guru” as a description of his activities. His own choice as to his profession was “social ecologist.” A social ecologist studies how societies interact and organize themselves. Social ecology is based on a theory developed by Murray Bookchin.  Proving that the conservative Drucker harbored no prejudices, Bookchin was a socialist and Drucker disagreed with his politics. Drucker differed dramatically even from how he performed his consulting. His methods of analyzing issues, solving problems, and making recommendations were far different from contemporaries. These differences included the organization of his consulting practice, the services he provided, and what Drucker elicited from his clients. He had no group of associates working with him. He practiced his profession alone.

If you called his home telephone, student, or consulting client,  you may have been surprised but you would hear his voice with his strong Viennese accent as he answered the phone. At school there was a department secretary who answered calls, but in his home office he had no secretary and answered all calls himself.

Drucker behaved in the classroom much as he behaved with his clients. What we saw is what we got, and as with all those he touched or studied his methods, we got quite a lot.