מאת: By William A. Cohen, PhD 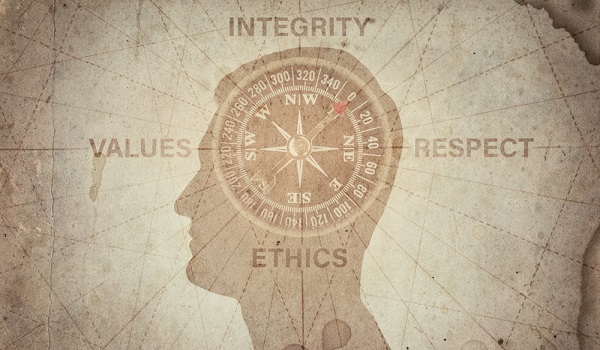 Drucker felt that personal integrity must be a part of everything that a leader did, and that without it, a leader had no legitimacy to lead and would not be trusted. Personal integrity frequently plays a major role in a professional becoming a leader and it is important as a basis for all of Drucker’s views on leadership and management.

I used to tell this story in the third person using the fictitious name “Herb.” But I was actually “Herb” and eventually I owned up to being the hero of my story.

As a recently commissioned Air Force lieutenant, after training, I was assigned as a navigator on a B-52 nuclear bomber. I flew all over the world and entered further training to be fully prepared for nuclear war if the U.S. was attacked. In flight I was strapped into one of two downward ejection seats for emergency egress. The other seat was occupied by a senior navigator who was designated the navigator-bombardier. Both of us had graduated from both bombardier and navigator schools. In addition to my navigation responsibilities was the responsibility for programming and launch of the two air-to-ground nuclear-tipped long range cruise missiles called “Hound Dogs.”  The missiles were new and there were still problems with them, and few aircrews were accurate in the simulated launches and impacts which were graded by radar on the ground. For a few months these simulated launches didn’t count against a crew’s performance. Once they did, they would have a major impact on our careers: those that got good scores were marked for future promotion. Those that didn’t, were held back in their careers or could be forced to leave the assignment.

Herb’s B-52 crewmates were all far more experienced than he. They were older, more senior in rank and several were combat veterans of both World War II and Korea. Herb had never been in combat and had never even served on an aircrew before. As navigator, he was responsible for the two “Hound Dog” missiles as well as aerial navigation, planning, and flight tasks having to do with bombing.

The period of learning expired. While on alert, Herb’s aircraft commander, a lieutenant colonel called the crew together. “When we fly our first training mission after alert, we will have Hound Dog missiles that will actually count,” he said. “We’re not going to debate this. We’re going to cheat to make sure we get reliable scores. All I want to hear from our navigators is how to do this.”

The senior navigator who was also the bombardier and a lieutenant colonel like the aircraft commander responded: “That’s easy,” he said. “Don’t follow the missile directional indicator needle after the navigator programs the missile and makes the simulated launch. I’ll figure out an adjustment for the ballistics, and I’ll use my radar bombsight on the target. All you do is to follow the bombsight’s directional needle instead of the missile’s. The radar site that scores the impact will not know that we’re bombing the target rather than the missiles simulating their dive impact after programing and no one else will know.”

Herb was shocked. He had been taught before while still a West Point cadet that you do not lie, cheat, or steal or tolerate any that do. Cadets who violated this were dismissed from the Academy without exception. Others in remorse for a cheating violation which only they knew about frequently terminated their own careers knowing that they had violated the strict standards of honor and integrity to which all were held. Honor and integrity were considered more important than success, and there was no compromise.

After a week of ground alert Herb’s crew had three days’ crew rest. These days were terrible for Herb. He was being ordered to cheat with the very missiles for which he was entrusted. But obeying orders was also important as was loyalty to his crew mates. He talked it over with other more experienced aviators in the squadron. They all advised him to follow the orders from the aircraft commander. They told Herb that this sort of thing happened occasionally. If he refused to cheat for these simulated launches which probably weren’t important except for training, it would likely end his career.

Herb had worked long and hard to join the Air Force. He had studied hard for an appointment to West Point, and with difficulty managed to earn an appointment and to graduate after four tough years to earn his commission as an officer. After commissioning Herb had spent a year in navigation school, eight months in bombardier school, several weeks of escape and evasion training in the desert, and several months of tough flying training in the B-52. It had taken more than six years altogether. How could Herb waste it for this one act which was after all only a training mission and for which cheating was apparently occasionally committed and accepted?

After crew rest when Herb’s crew met to plan the mission, Herb asked to speak to his aircraft commander privately. Alone, Herb told him: “If you want to cheat, that’s up to you. But get another navigator because I’m not going to do it.” Herb’s commander was much older, senior by several ranks, and had far more service and experience. He had given a direct order. He was furious. After trying unsuccessfully to convince Herb to cheat, he left the room, slamming the door, as he left the room. Herb thought that his career was over. He had no other profession to support his family, and there was a recession and jobs were scarce. The airlines had long since stopped using navigators, so even this wasn’t an option. What would his parents who had been very proud of him think?

An hour or so later, Herb’s commander was still angry when he said that he wanted to speak to Herb alone. He told Herb: “We’ll do it your way and won’t cheat, but those missiles better be reliable.” “I’ll do everything possible to make them reliable, but I won’t cheat,” responded Herb.

The missiles were reliable. Analyzing these results later, Herb didn’t know if he was skilled, lucky, or whether these two more experienced aviators had found a way to fool him and cheat anyway. One thing Herb did know. He knew how far he would go for what he believed to be right. Years afterwards, from over a thousand officers in his Bomb Wing Herb was one of only a very few to eventually become a general. Later as a civilian he rose to responsible jobs in other fields too.

What I Gained from this Experience

I believe my decision as an inexperienced navigator helped me significantly as I matured and still affects my actions today. Had it ended my career, it would still have been worth it for priceless knowledge about myself. Even my aircraft commander was impressed and had told my squadron commander: “I don’t know whether Herb is a good navigator or not. But I do know that I can trust him.”

I have read many management authors who have written that leaders should demonstrate personal integrity. Drucker is the only one that wrote that this was a requirement and leaders must demonstrate personal integrity. I also know of individuals who went to jail for violations which not only violated their honor, but the law. That others had taken similar actions in their organizations or that their livelihood was threatened was no defense.

Integrity was something that Drucker Believed Essential

Personal Integrity was a value Drucker believed in. Yet, he made mistakes and sometimes he made errors of fact in his writing or speaking when he was in a hurry. Not infrequently these were discovered by his students. Unlike many professors I have seen, he never would never fail to own up to a mistake if challenged and was wrong. He might smile sheepishly and say: “You are right. I’m not a historian, I was trying to make a point. I should have been more careful.” I wish that other professors would have admitted their mistakes and taken responsibility as readily.

I have worked with many leaders in the military, business, government, and academia. Some have demonstrated personal integrity and gone on to great things. Others have demonstrated integrity and it cost them their careers. And yes, some with no integrity at all were promoted and continued in their careers as if nothing had happened. Drucker said, “although followers will forgive a leader much, they will never forgive a lack of integrity.” And as Shakespeare wrote: “This above all: to thine own self be true, And it must follow, as the night the day, Thou canst not then be false to any man.”